First Look! Strontium Dog- No Choice At All. 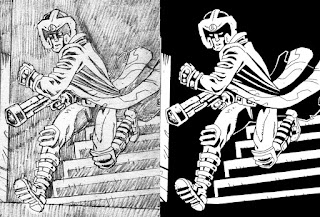 Currently being worked on by artist David Broughton for Dogbreath, Strontium Dog- No Choice At All has been written by Lee Robson and is currently scheduled for Dogbreath #31, on sale spring 2016.
Posted by Unknown at 00:00 No comments:

Coming soon to the pages of Zarjaz, Judge Dredd- The Epiphany of Treasure Highland is by writer Mark Howard and artist Daniel Dwyer.

Mark "is struggling manfully against life's slings and arrows."

Judge Dredd- The Epiphany of Treasure Highland is scheduled to appear in Zarjaz 25- on sale November, just in time for Thought Bubble!
Posted by Unknown at 00:00 No comments:

FIRST LOOK: Hershey- A Day In The Life. 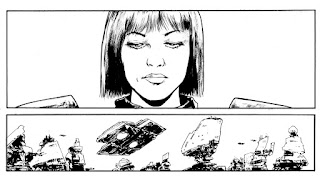 A first look here at a strip that is currently only a work in progress.

Hershey- A Day In The Life is written by Santiago Mayaud and is currently being worked on by artist Conor Boyle. I think you will agree that if the rest of the strip looks as good as this, then we are in for something special.

Thanks to Conor for sharing.
Posted by Unknown at 00:00 No comments:

Seeing as the new comics are out in the wild now I'm going to be opening this post for all reviews and comments that I see or get sent.

Starting with:
Mac's Books over at Bleeding Cool.
Thanks to Olly Macnamee for writing this and to Cal's Arena artist Steve Austin for telling me about it before anyone else.

Next up is long time friend of FQP- The Fobidden Planet blog, thanks guys!

We've also had a cracking review over at Starburst Magazine, giving special mention to THE WEE NAP. Thanks to Alister Davison.

As always- if you see anything more- please send me a link!
Posted by Unknown at 00:00 No comments: 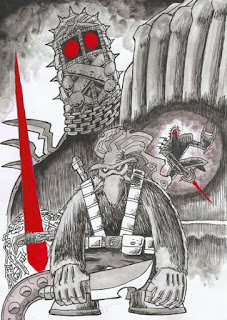 Art by Scott Twells- Click to see a bigger version.

Coming soon to the pages of ZARJAZ- SHAKARA! The fourth Buggerian. Written and drawn by Scott Twells. Not really anything more we can say about this yet...
Posted by Unknown at 00:00 No comments:

Mike Collins provides his first cover to Zarjaz and kicks the summer Dreddworld issue of in fine style. Containing a whopping 8 strips, Zarjaz 24 shows you the fanzine of the future. 48 pages for the amazing price of £3.00.

Mike Collins (Art: Cover) A lifelong fan of 2000 AD, Mike has contributed to the Prog and the Meg over the last 25 years, as an artist working on Dredd, Slaine, Rogue Trooper, Hondo City and Sinister Dexter; as a writer- numerous Future Shocks. He co-created American Gothic with Ian Edginton. Currently storyboard artist on Doctor Who Series 9, and artist on Eddie Robson scripted 'Commercial Break' 3riller. www.freakhousegraphics.com

Mike Lynch (Script: Cal’s Arena) is a writer based in the West of Ireland. His work has appeared in several small press titles in Ireland and England. www.abandonedcomics.com

Steven Austin (Idea & Art: Cal’s Arena) lives in a cave in deepest Cambridge, he surrounds himself with comic and movie memorabilia only venturing into the wilds occasionally to gather coffee beans, hot water and milk.

David Griffiths (Writer: Prometheus Unchained) is a Liverpool writer of comics, films and play. He is currently looking for artists to collaborate with on creator owned projects. Contact David on Twitter @daveygriff

Stephen Prestwood (Art:Prometheus Unchained) As well as my own Dark Zone comic I have illustrated for The Jock, Zarjaz, BAM!, Violent!, Paragon and many others.

Martin Currie (Judge Dredd- Stance) first drew Dredd in 1978, in the margins of his school books. Now in his fifties you'd think he'd have grown out of it. It would seem not.

Lee Robson (Writer: Judge Dredd- Video Nasties) is the writer/co-creator of the critically acclaimed OGN Babble. His work has also appeared in FutureQuake, Something Wicked and the Accent UK series of themed anthologies. Find his blog at http://www.imaginarystories.co.uk.

John Hutcheson (Art: Judge Dredd- Video Nasries) has produced work for the small press such as Zarjaz and Dogbreath, as well as illustrations for a variety of commercial clients. His next major comic work will be "Watson Watt's world of the mysterious"

David Broughton (art: Judge Dredd- Yet another rainy day) has drawn various comic strips for Zarjaz, Dogbreath and other small press publications. visit his blog for more information and illustrations at http://dbroughton.blogspot.co.uk/ or email him at dbroughton@hotmail.co.uk

Tony McVeigh (Writer: Lowlife- Attack of the Naturists) Tony is an aspiring comic book professional from Northern Ireland. Why not check out his blog at http://youarecomicscomicsblog.blogspot.com/ and his new web-comic http://serpenteen.thecomicseries.com/

Eddy Lyle (Art: Lowlife- Attack of the Naturists) is some guy, who draws comics. He is currently trying to figure out how to draw ornate buildings and hands and a few other things. eddy-lyle.tumblr.com

Matt Farr (Writer: Red Razors- Masquerade) is a blogger, amateur reviewer and co-host of the Dissecting Worlds podcast with many years experience of reading and watching stuff before trying his hand at creating it too. His favourite 2000 AD character is Deputy Chief Judge Grampus.

Shaun Avery (Writer: Tales Of Mega-City One- Death In Pictures) recently co-created the comic Spectre Show. When not writing horror stories, he likes to watch arty, subtitled movies. Because he enjoys them. Not because he is pretentious. Honest.

Bhuna (Art: Tales Of Mega-City One- Death In Pictures) Small press doodler and all round good guy! Series artist for Buck Tucker for Vanguard Comic, Massacre for Boys, and is currently working on Killing Moon for Pigdog Press.

This issue is so packed we didn't have room for the creator bio Page! So it is here! 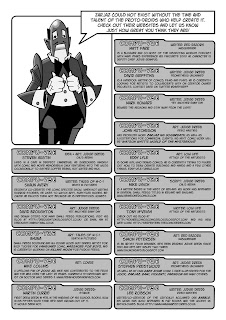 Bruce McLaren (Art: The Second Chumming) This dangerously unhinged cyborg has reconstructed itself from old agricultural machinery, with state-of-the-arse arm upgrades. Last sighted pulling the wings off chickens at a remote haggis farm in Moray.
Still only £3.00, you don’t deserve it! Available from the FQP Webshop!
Posted by Unknown at 00:00 No comments: 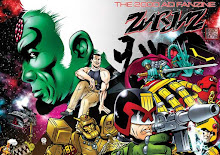 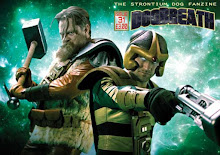 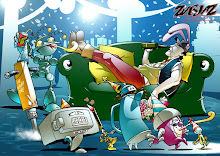